How to Get Involved in the Booming Python Job Market 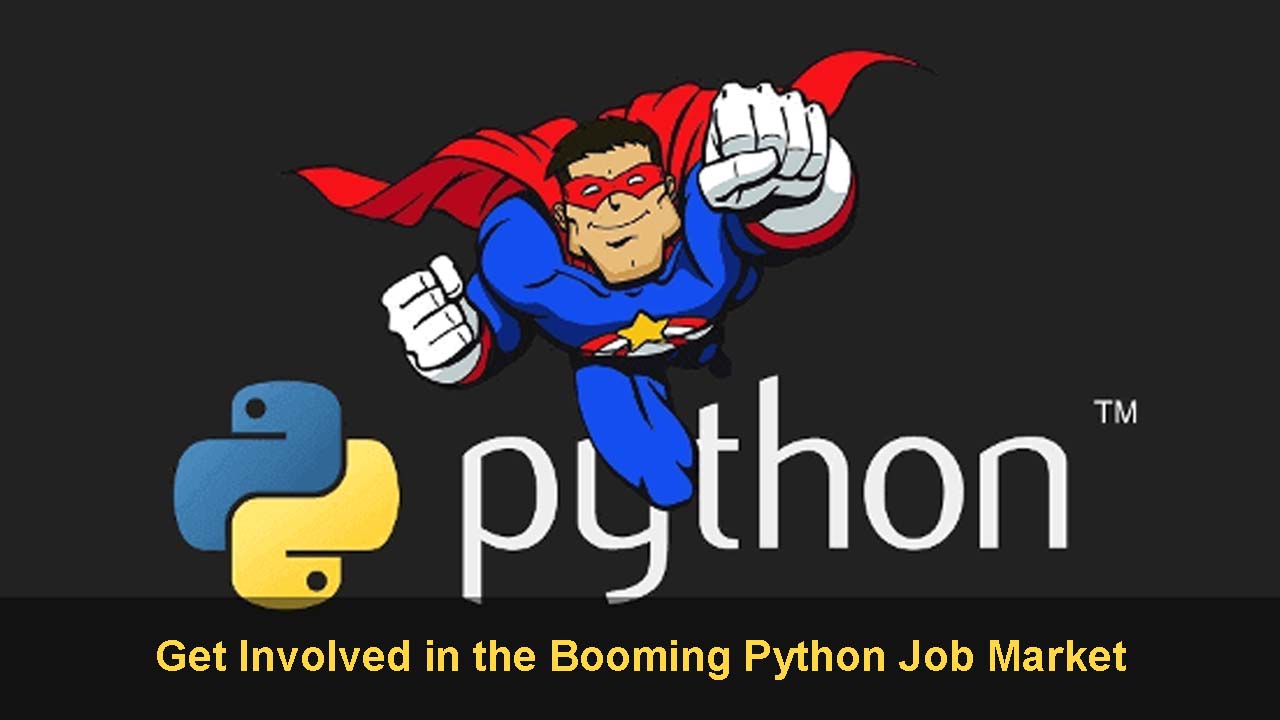 From finance to artificial intelligence, data science to web development, there isn’t an area in which Python isn’t consolidated and flourishing. So let’s discuss actual salaries, in-demand skills, marketplaces, and what to do in order to remain competitive.

Information technology has created an extremely varied and dynamic market, and saying “computer science” alone is something of an umbrella term now. Pretty much everything has elements of IT in it to some degree — from the algorithms that recommend which TV series you should watch, to the code on this page, and even the software integrating your home appliances with your mobile.

From this wide array of areas — all of them careers in their own right — we’ll pick a handful. All of them are within multi-million/billion-dollar industries that are particularly hot as of 2020, and will most probably remain active in the foreseeable future.

We are talking about:

Nearly any position in an exciting, forward-moving and profitable industry will require Python mastery. Stack Overflow Trends very eloquently shows how Python has gained traction since 2008 to become the most talked-about programming language.

But programming alone won’t cut it. You’ll also need solid knowledge specific to the industry before you’ll be considered for the position.

Let’s examine how Python has stacked up against other languages in each field during the last five years on Google Trends, and also discuss what additional knowledge will be expected from you.

It’s probably not necessary to explain why Artificial intelligence (AI) is hot right now. In fact, it seems like a formula for financial success over the past decade was:

Machine learning is still on, but these days the name of the game is deep learning. If you’d like to dig even deeper, look at convolutional neural networks.

Extra: see 5 Ways to Get Started with Machine Learning for some resources on the topic.

But let’s not leave it at AI. Enter math.

Have you heard about the law of the instrument? Abraham Maslow famously said: “I suppose it is tempting, if the only tool you have is a hammer, to treat everything as if it were a nail.”

In our current situation, what that means is that if all we know is AI, whatever problem is presented to us we’re going to try to find datasets and train algorithms for it, when surprisingly often what we needed was just a simple probabilistic model to be able to make a quick prediction. In other words — math.

If you’d like to go a step further and complement your AI knowledge, look into:

The share of jobs requiring AI skills has grown 4.5x in the last five years, with one in four North American companies having ML embedded in at least one enterprise function as of 2018. Additionally, Apple, Facebook, and Google are investing in deep reinforcement learning (DRL), and AI-enabled tools are expected to generate nearly $3 trillion in business value by 2021, with the Natural Language Processing (NLP) market alone predicted to reach $22 billion by 2025.

With all this, it’s no surprise that top AI specialists are making $300-500k salaries.

This is another way of saying integrating services with the cloud — and yet it’s another field you can be most certain will keep on growing.

In the “serverless” execution model, companies are able to reduce maintenance, save costs, and effectively exchange information across all platforms.

There are a number of cloud infrastructure providers, but to remain competitive you can focus on handling things with these three:

Particularly, you want to be able to implement and deploy APIs with AWS Lambda and the Amazon API Gateway — or their equivalents in Google’s Cloud Functions and Microsoft’s Azure Functions.

Extra: see a Comparison of Shared and Cloud Hosting, and How to Choose to further understand how these cloud providers structure their services.

DevOps-related roles have doubled since 2015, and there are more than 50K+ cloud computing jobs in the US alone

For a cloud specialist in the US the median salary is $146K.

Originally I didn’t plan to include blockchain in this listing because in the (limited and surely biased) way in which I see things, it wasn’t all that clear to me that cryptocurrencies would still be a thing just a few years down the road.

But hey, it’s a fairly active field right now with job offers all over the place!

And if you collect enough knowledge to understand the financial aspects of cryptocurrencies, combined with Python mastery, that could open many doors at the IT departments of some investment banks and fintech startups.

Blockchain is not only the foundation for cryptocurrencies, but also can be used to build distributed ledgers with a number of applications.

As we mentioned, blockchain demand is booming and the market is expected to grow at over 60% per year.

Blockchain engineers are making between $150k and $175k.

Data science has an ever-increasing number of fields of study:

It also has an endless number of complementary practices and tools, such as cleansing, collection, compression, curation, farming, integration, migration, preservation, recovery, retention, scraping, wrangling, … to name “a few”.

Hopefully it is becoming fairly evident that Python is merely a tool, and how much there is to learn about all of the different ways in which you can use it. But if you really want to nail it as a data scientist, you’ll also need to learn about the field in which you’re going to apply it — be it biology, finance, social phenomena or something else.

The investment in data-driven processes has doubled in five years, to $1 trillion in 2018, and more than half of the companies plan to increase positions requiring data analysis skills.

A data engineer in the US can make an average base pay of $115k.

This is arguably the least hot topic in this list. But the truth is that even with the rise of the aforementioned microservices, web development isn’t going anywhere any time soon. Both web and mobile apps still require heavy back-end programming to process the input from the web browser or the mobile’s UI.

Back in the day, being familiar with Linux was “a plus”. Today, as a back-end developer, that’s considered a given: the “plus” is that you ought to be able to orchestrate cloud infrastructure and have at least some degree of familiarity with DevOps practices, such as deployment pipelines and dealing with software containers.

Extra: see DevOps by Example: Tools, Pros and Cons of a DevOps Culture for a primer on the topic.

Databases All the Way(s)

To properly manage back-end development, you’ll also need to swim comfortably among different RDBMSs such as PostgreSQL and MySQL. And you should also know that data management has also been going NoSQL for some time, and that MongoDB and Redis proved the test of time as solid implementations.

The US Bureau of Labor Statistics projects over 15% job growth for web developers over the next five years.

The salary figures for a back-end developer in the US can vary wildly, with a median of $72k, ranging from $34k up to $98k.

Hopefully the case for Python being a key part of the technology stack is already made, so let’s say you would like to be part of something big and apply for a full-time position. Or maybe you’d like to take it easy, do some part-time Python programming while enjoying life and/or supplementing your income.

Keep on reading then. If you can work with Python, you have choices.

Searching for a Python Full-time Job

LinkedIn is not only a networking platform but also one of the biggest recruiting sites. Sure, having a well-connected profile will help as it will save you some cover letters. But even if you’re a newbie to LinkedIn, you can still search Python jobs and filter by country and state.

It’s very unlikely that you’re a developer and don’t spend time on Stack Overflow as part of your routine. Aside from Q&As, Stack Overflow also has well curated job listings, where you can filter “visa sponsor” companies who are eager to bring over foreign talent. Search developer jobs using Python.

Now, getting more specific, you must definitely have a look at PythonJobs.com and the Job Board at the official Python site. They’re not nearly as comprehensive as the platforms, but as spot on as you can get.

And if you want a remote job specifically, SitePoint Remote offers many listings for Python engineers.

Finally, Angel.co is a startup community created to connect developers, entrepreneurs and investors. It can be a place worth checking if you’re looking to work for an exciting and newly created startup.

Freelancing is a beast of its own, and a topic that would require a series of articles. For now, we’ll just point out which platforms might be of interest.

After the merge of Elance and oDesk in 2013, Upwork became the main marketplace for freelancing, where millions of jobs are posted annually. That means tons of potential hires in fields ranging from software development to data science and analytics (and of course, don’t forget to browse the Python freelance jobs). Another good idea might be to check other Python developer profiles to see what are they offering and how much they charge.

The downside of Upwork is not only that it can be quite tedious to find the needle in the haystack, but competing with 12 million other freelancers can be tough. Plus, Upwork fees are the highest you’ll have to pay!

Freelancer is another marketplace, smaller in size though still quite big and active, where users report a good experience and there is an attractive no commission program (very different from Upwork’s 20% cut). Make sure you check the Python jobs listing.

If you already have a consolidated profile as a Python developer, you might consider applying for Toptal, which is a platform that claims to curate the top 3% of freelance talent.

Essentially, Toptal will screen your profile, and if it matches their criteria you’ll be shortlisted for clients who don’t mind paying extra to those who’ve already proved they can go the extra mile. Both full- and part-time options are available, even including hourly assignments.

Honestly, the programming language itself is sometimes a secondary matter when it comes to solving a problem, when what’s really required is having an understanding of the situation at hand and an open mind. Your potential employer won’t care much about how well you have mastered the ins and outs of Python if you don’t know much about the field you want to work in. And the ways things are these days, these specifics change and expand quite often.

What that means is that you need to be constantly learning, because whatever edge you have right now, you won’t have it in just a few years.

Personally, I don’t like unsolicited advice much, as it’s sort of pedantic. But if I may, and just for the sake of wrapping up this article: be proactive, be curious, go the extra mile, adapt and don’t be satisfied with what you already know. In the end, it won’t matter much what your programming language is, as you’ll always be in demand.