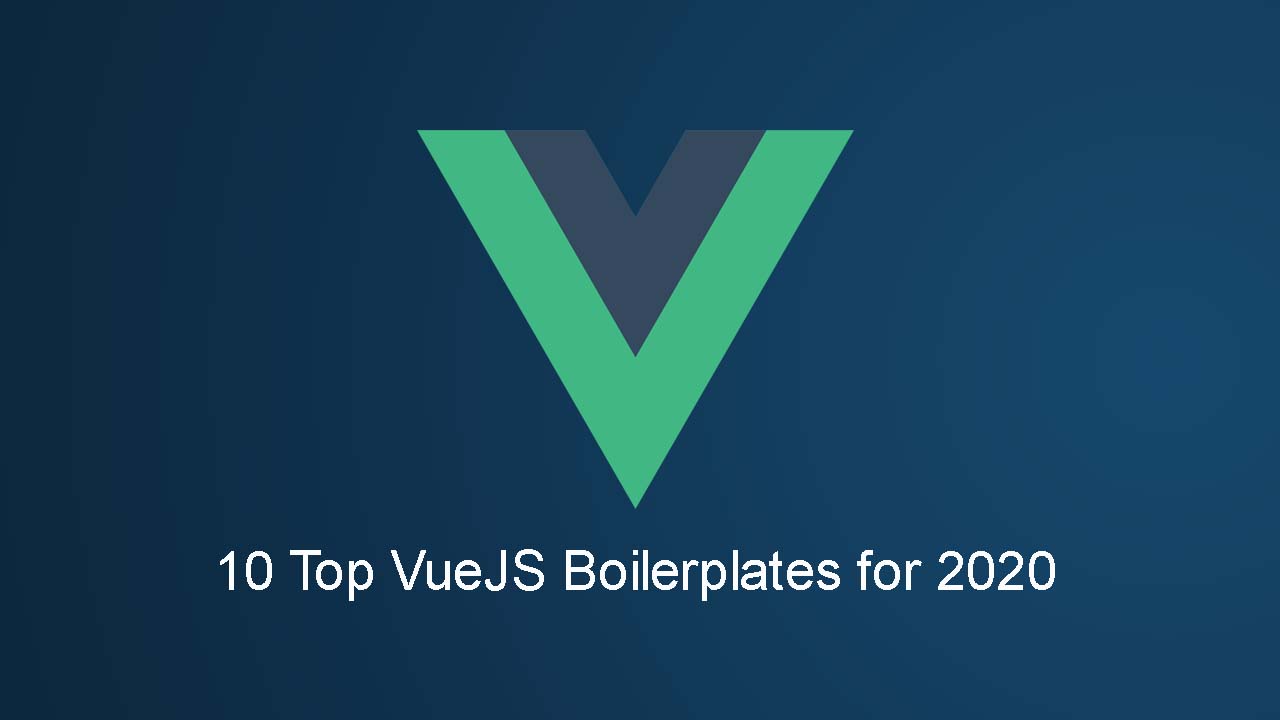 10 Top VueJS Boilerplates for 2020 .Boilerplates give you a head start and solid foundation by installing a template for your project. They create a local environment by automatically installing the entire framework needed for the project.

With 5.4k GitHub Stars, this is one of the most used boilerplates for Vuejs. Created by Vue Core team member Chris Fritz, it is mostly used by larger teams. It better suits enterprise-level applications due to the following reasons:

This feature is seen in applications like Slack, the chat application Discord, and even in Microsoft Visual Studio. Electron-nuxt includes features like:

Progressive Web Apps (PWA) are widely used to create comprehensive sites or apps. They are web pages with an app-like appearance. PWA is quick in responding to instructions, loads instantly, and engages users with a natural experience. Vuesion is a boilerplate for production-ready PWA’s. It installs quickly through npx or npm and focuses on best practices and performance during the development and production phases. This MIT licensed project with 2k GitHub Stars displays a live demo on Heroku. Here are some salient features of Vuesion:

Nw.js is a framework used to build desktop applications using HTML, CSS, and Java. It is built on top of Chromium and Node.js. To build Vue applications, you can install the Vue.cli and add NW.js dependencies and NW.js SDK on your Vue project. It has 70 GitHub Stars and is a quick starter boilerplate for Vue applications. Below are the features and advantages of using NW.js in your project:

Electron-Vue is a widely used boilerplate with 11.6K GitHub Stars. It is interesting to see the GitHub page displaying the list of projects developed on Electron Vue. As the name suggests, it is used to create electron applications for the Vue framework. Electron is an open-sourced library developed to build cross-platform desktop applications. It uses Chromium and Node.js to create single runtime apps. The application runs on various OS platforms like Mac, Windows, and Linux.

Vue.js Starter transpiles all javascript files using babel and enables easy debugging using sourcemaps during the development process. It mainly works on server-side rendering which is not seen in other boilerplates. Though the Vue.js starter lacks documentation, it provides a demo application of server-side rendering using vue.js. Below are the advantages of using the Vue.js starter:

This can be used where the time-to-content is critical as it gives the best possible initial load performance.

As the name suggests, Vuetify is used to beautify your Vue projects. With 23.7K Github Stars and generous contributions, it has been in active development since 2016. It boasts a significant list of sponsors on Github and is a Material Design Component Framework and reduces the design effort for Vue projects. These are the advantages of Vuetify.:

Vue.wordpress is a boilerplate which builds Single Page Applications (SPA) using WP REST API and Vue.js. It is optimized for performance and enables better SEO with server-side rendered pages and content. Its front-end works like a SPA and uses WordPress and WP Rest API to manage back-end content. It has 145 Github Stars and also requires a minimal level of PHP knowledge. The boilerplate builds a demo of a basic website. These are some features that are included:

It has 407 Github Stars and the project is licensed under the MIT Licence. These are its main benefits:

Vue Skeleton MVP enables you to create Vue applications using Vue.js, Vuetify, Vue router, and Vue skeleton. It is written in Javascript using the async/await function and has 234 Github Stars and provides a link to a demo application. The features of Vue skeleton MVP are to provide a basic template for a quick start.

Boilerplates give you a head start and solid foundation by installing a template for your project. They create a local environment by automatically installing the entire framework needed for the project.

While it is a good idea to take a hint from the GitHub Stars when selecting a boilerplate, it is more important to look at the functionality offered by each of them as no one boilerplate suits all projects. Another vital factor to consider is the type of application they support.