Node.js Child Processes: Everything you need to know 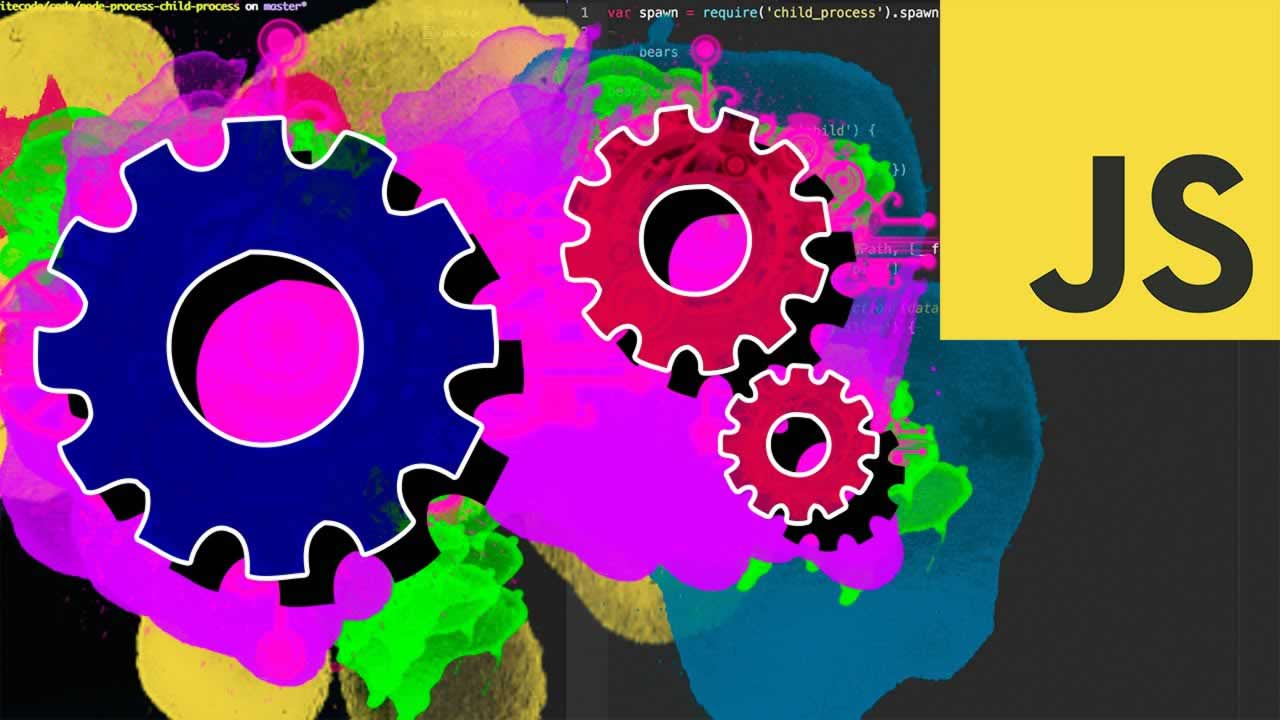 Single-threaded, non-blocking performance in Node.js works great for a single process. But eventually, one process in one CPU is not going to be enough to handle the increasing workload of your application.

No matter how powerful your server may be, a single thread can only support a limited load.

The fact that Node.js runs in a single thread does not mean that we can’t take advantage of multiple processes and, of course, multiple machines as well.

Using multiple processes is the best way to scale a Node application. Node.js is designed for building distributed applications with many nodes. This is why it’s named Node. Scalability is baked into the platform and it’s not something you start thinking about later in the lifetime of an application.

This article is a write-up of part of my Pluralsight course about Node.js. I cover similar content in video format there.

The child_process module enables us to access Operating System functionalities by running any system command inside a, well, child process.

We can control that child process input stream, and listen to its output stream. We can also control the arguments to be passed to the underlying OS command, and we can do whatever we want with that command’s output. We can, for example, pipe the output of one command as the input to another (just like we do in Linux) as all inputs and outputs of these commands can be presented to us using Node.js streams.

Note that examples I’ll be using in this article are all Linux-based. On Windows, you need to switch the commands I use with their Windows alternatives.

There are four different ways to create a child process in Node: spawn(), fork(), exec(), and execFile().

We’re going to see the differences between these four functions and when to use each.

The spawn function launches a command in a new process and we can use it to pass that command any arguments. For example, here’s code to spawn a new process that will execute the pwd command.

We simply destructure the spawn function out of the child_process module and execute it with the OS command as the first argument.

The result of executing the spawn function (the child object above) is a ChildProcess instance, which implements the EventEmitter API. This means we can register handlers for events on this child object directly. For example, we can do something when the child process exits by registering a handler for the exit event:

The other events that we can register handlers for with the ChildProcess instances are disconnect, error, close, and message.

Every child process also gets the three standard stdio streams, which we can access using child.stdin, child.stdout, and child.stderr.

Since all streams are event emitters, we can listen to different events on those stdio streams that are attached to every child process. Unlike in a normal process though, in a child process, the stdout/stderr streams are readable streams while the stdin stream is a writable one. This is basically the inverse of those types as found in a main process. The events we can use for those streams are the standard ones. Most importantly, on the readable streams, we can listen to the data event, which will have the output of the command or any error encountered while executing the command:

The two handlers above will log both cases to the main process stdout and stderr. When we execute the spawn function above, the output of the pwd command gets printed and the child process exits with code 0, which means no error occurred.

If an error occurs during the execution of the command, for example, if we give find an invalid destination above, the child.stderr data event handler will be triggered and the exit event handler will report an exit code of 1, which signifies that an error has occurred. The error values actually depend on the host OS and the type of error.

In the example above, the child process invokes the wc command, which counts lines, words, and characters in Linux. We then pipe the main process stdin (which is a readable stream) into the child process stdin (which is a writable stream). The result of this combination is that we get a standard input mode where we can type something and when we hit Ctrl+D, what we typed will be used as the input of the wc command.

We can also pipe the standard input/output of multiple processes on each other, just like we can do with Linux commands. For example, we can pipe the stdout of the find command to the stdin of the wc command to count all the files in the current directory:

I added the -l argument to the wc command to make it count only the lines. When executed, the code above will output a count of all files in all directories under the current one.

Shell Syntax and the exec function

By default, the spawn function does not create a shell to execute the command we pass into it. This makes it slightly more efficient than the exec function, which does create a shell. The exec function has one other major difference. It buffers the command’s generated output and passes the whole output value to a callback function (instead of using streams, which is what spawn does).

Since the exec function uses a shell to execute the command, we can use the shell syntax directly here making use of the shell pipe feature.

Note that using the shell syntax comes at a security risk if you’re executing any kind of dynamic input provided externally. A user can simply do a command injection attack using shell syntax characters like ; and $ (for example, command + ’; rm -rf ~’ )

The exec function is a good choice if you need to use the shell syntax and if the size of the data expected from the command is small. (Remember, exec will buffer the whole data in memory before returning it.)

The spawn function is a much better choice when the size of the data expected from the command is large, because that data will be streamed with the standard IO objects.

Because of the shell: true option above, we were able to use the shell syntax in the passed command, just like we did with exec. But with this code, we still get the advantage of the streaming of data that the spawn function gives us. This is really the best of both worlds.

There are a few other good options we can use in the last argument to the child_process functions besides shell and stdio. We can, for example, use the cwd option to change the working directory of the script. For example, here’s the same count-all-files example done with a spawn function using a shell and with a working directory set to my Downloads folder. The cwd option here will make the script count all files I have in ~/Downloads:

One last important child process option to explain here is the detached option, which makes the child process run independently of its parent process.

Assuming we have a file timer.js that keeps the event loop busy:

We can execute it in the background using the detached option:

If the unref function is called on the detached process, the parent process can exit independently of the child. This can be useful if the child is executing a long-running process, but to keep it running in the background the child’s stdio configurations also have to be independent of the parent.

The example above will run a node script (timer.js) in the background by detaching and also ignoring its parent stdio file descriptors so that the parent can terminate while the child keeps running in the background.

If you need to execute a file without using a shell, the execFile function is what you need. It behaves exactly like the exec function, but does not use a shell, which makes it a bit more efficient. On Windows, some files cannot be executed on their own, like .bat or .cmd files. Those files cannot be executed with execFile and either exec or spawn with shell set to true is required to execute them.

The functions spawn, exec, and execFile from the child_process module also have synchronous blocking versions that will wait until the child process exits.

Those synchronous versions are potentially useful when trying to simplify scripting tasks or any startup processing tasks, but they should be avoided otherwise.

The fork function is a variation of the spawn function for spawning node processes. The biggest difference between spawn and fork is that a communication channel is established to the child process when using fork, so we can use the send function on the forked process along with the global process object itself to exchange messages between the parent and forked processes. We do this through the EventEmitter module interface. Here’s an example:

In the parent file above, we fork child.js (which will execute the file with the node command) and then we listen for the message event. The message event will be emitted whenever the child uses process.send, which we’re doing every second.

To pass down messages from the parent to the child, we can execute the send function on the forked object itself, and then, in the child script, we can listen to the message event on the global process object.

Let’s do a more practical example about the fork function.

Let’s say we have an http server that handles two endpoints. One of these endpoints (/compute below) is computationally expensive and will take a few seconds to complete. We can use a long for loop to simulate that:

This program has a big problem; when the the /compute endpoint is requested, the server will not be able to handle any other requests because the event loop is busy with the long for loop operation.

There are a few ways with which we can solve this problem depending on the nature of the long operation but one solution that works for all operations is to just move the computational operation into another process using fork.

We first move the whole longComputation function into its own file and make it invoke that function when instructed via a message from the main process:

In a new compute.js file:

Now, instead of doing the long operation in the main process event loop, we can fork the compute.js file and use the messages interface to communicate messages between the server and the forked process.

When a request to /compute happens now with the above code, we simply send a message to the forked process to start executing the long operation. The main process’s event loop will not be blocked.

Once the forked process is done with that long operation, it can send its result back to the parent process using process.send.

In the parent process, we listen to the message event on the forked child process itself. When we get that event, we’ll have a sum value ready for us to send to the requesting user over http.

The code above is, of course, limited by the number of processes we can fork, but when we execute it and request the long computation endpoint over http, the main server is not blocked at all and can take further requests.

Node’s cluster module, which is the topic of my next article, is based on this idea of child process forking and load balancing the requests among the many forks that we can create on any system.

That’s all I have for this topic. Thanks for reading! Until next time!