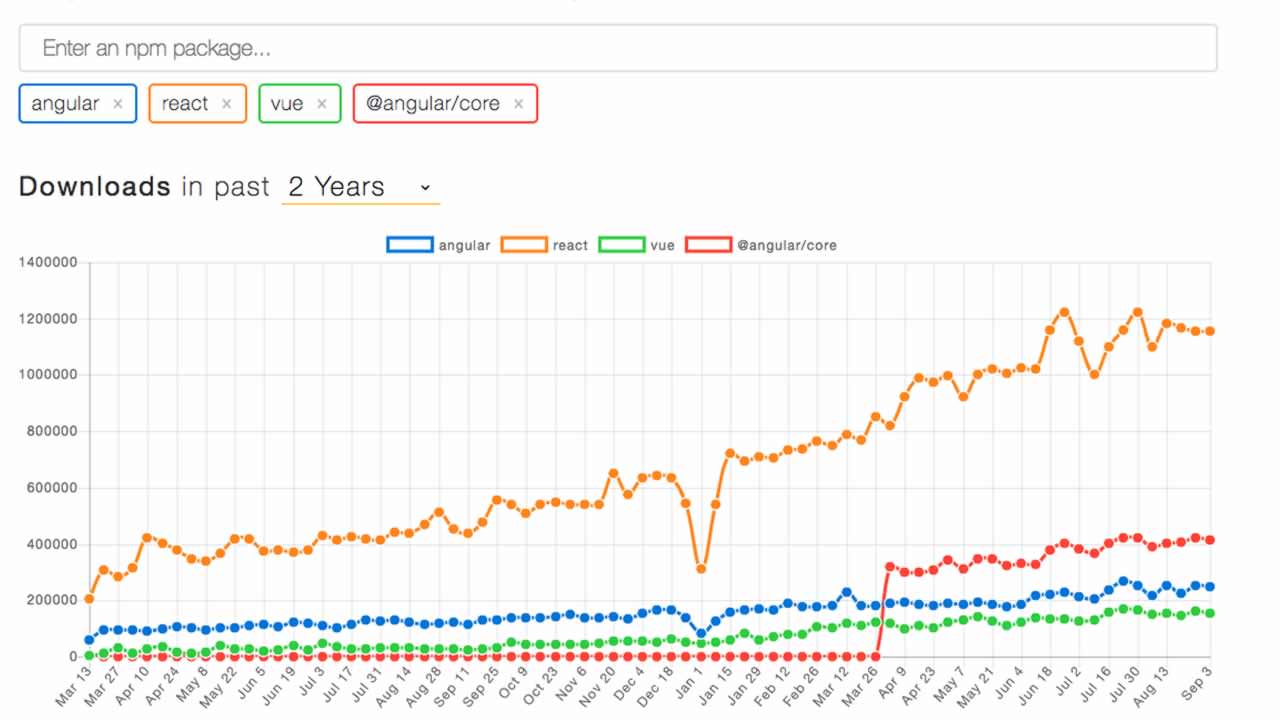 VueJS vs Angular/React : Can Vue Take on Angular/React and Win? Before proceeding into the specifics let me set context right. Angular (especially after its release of version 5&6) and React is a mammoth among the JS frameworks.

Before proceeding into the specifics let me set context right. Angular (especially after its release of version 5&6) and React is a mammoth among the JS frameworks. These are the two that have been bulling others in this space and are clear front-runner. Though Vue.js was launched in 2013 it is still considered as a new entrant with the eye of a tiger and a burning desire to strike hard and mark its identity among the lines of successful and efficient JS frameworks. This blog mostly speaks about how Vue might give Angular and React a run for its money in the near future.

Many see Vue as yet another JS framework that is used to build front end user interfaces. Though it might be true on ground reality, Vue being designed to be incrementally adoptable make its integration with other JS libraries simple which sets it apart from its competitors and predecessors. It can also be considered a fully functional Web Application development framework with a proven capability to completely power advance single page applications by making its UI developments attributes such as — components, declarative UI, hot-reloading, time-travel and debugging highly approachable. What sets Vue highly apart from its predecessors is the ability to be less assertive and aggressive which makes it even more approachable for developers. Unlike Angular which is laid on the foundation of Typescript or React which uses its own syntax makes it complex and with every new release there is a fair amount of framework updates in Angular which add more to the overall complexity on understanding it. Vue is fairly simple and is easy to learn which make its fun to develop. These make it a JS framework of choice and is replacing Angular and React on multiple use cases.

It was first released in 2013 and now it has 100,000+ starts on GitHub and is downloaded number of times this year. The below statistics would provide an insight on the adoption of Vue in the last 1 year. Still small one can clearly understanding the raise in the download rate of Vue.

Why is Vue.js special?

Vue is special coz it resonates what every front-end developer has ever dreamt of — a simple yet powerful language, easy to understand, clear documentation, less opinionated and above all being lightweight. All of these are offered by Vue without any compromises on the app performance and scalability. Some distinctive features of Vue which sets it apart from its competitors are:

Tiny Size: Size determines the success of a JS framework. The smaller the size is, the greater its acceptance that’s the trend line on any JS framework. Vue’s framework is 18–21kb which makes it the most feather weight JS framework available in the market. To add to it the framework by itself is the fastest from a performance perspective compared to some of the heavy weights such as Angular, React and Ember.

Developer Friendly: Vue not just adds value to the application but it adds to the developer/development team too. The framework is easy to understand and develop due to its simple structure. Since it is powered by a templating engine, developers can create small and large templates in no time. In case of discrepancies, debugging can be done in no time due to its simple structure.

Simple Integration: Another benefit Vue offers to developers are the integrations. Now developers can easily integrate the framework into their applications due to the readily available components. To add to it the documentations are solid which make the development team to get acquainted and implement integrations on the fly.

Flexibility: A great deal of flexibility is another advantage of Vue.js. It allows the user to write their template in HTML file, JavaScript file, and pure JavaScript file using virtual nodes. This flexibility also makes it easy to understand for the developers of other JavaScript framework.

Bilateral Communication: And last but not least Vue.js also facilitates two way communications because of its MVVM architecture which makes it quite easy to handle HTML blocks.

Key Differentiation between David and Goliath

From the above data the only cornerstone that Vue has left un-turned till now is its developer’s community. This again is due to the fact that Angular and React have been backed by tech giants like Google and Facebook whereas Vue was initially a one man show run by Evan You. Now with the backing of Alibaba and Laravel, Vue has pretty much the opportunity and platform it needed to grow big and make a dent which its predecessors once had.

There is a myth among the developers community that Vue is still considered for small scale projects and Angular/React are still THE frameworks for large scaled applications. The below stats clearly breaks all those stereotypes and gives insights that “Yes applications of high concurrent traffic and complex environment can be developed and deployed successfully using Vue”

To add to it below are the brands that have adopted Vue in the recent past.

To conclude, one can say that Vue.js has what it takes to give its predecessors a run for their Money and marks its identity among the line of successful and efficient JS frameworks like Angular.js and React.js.