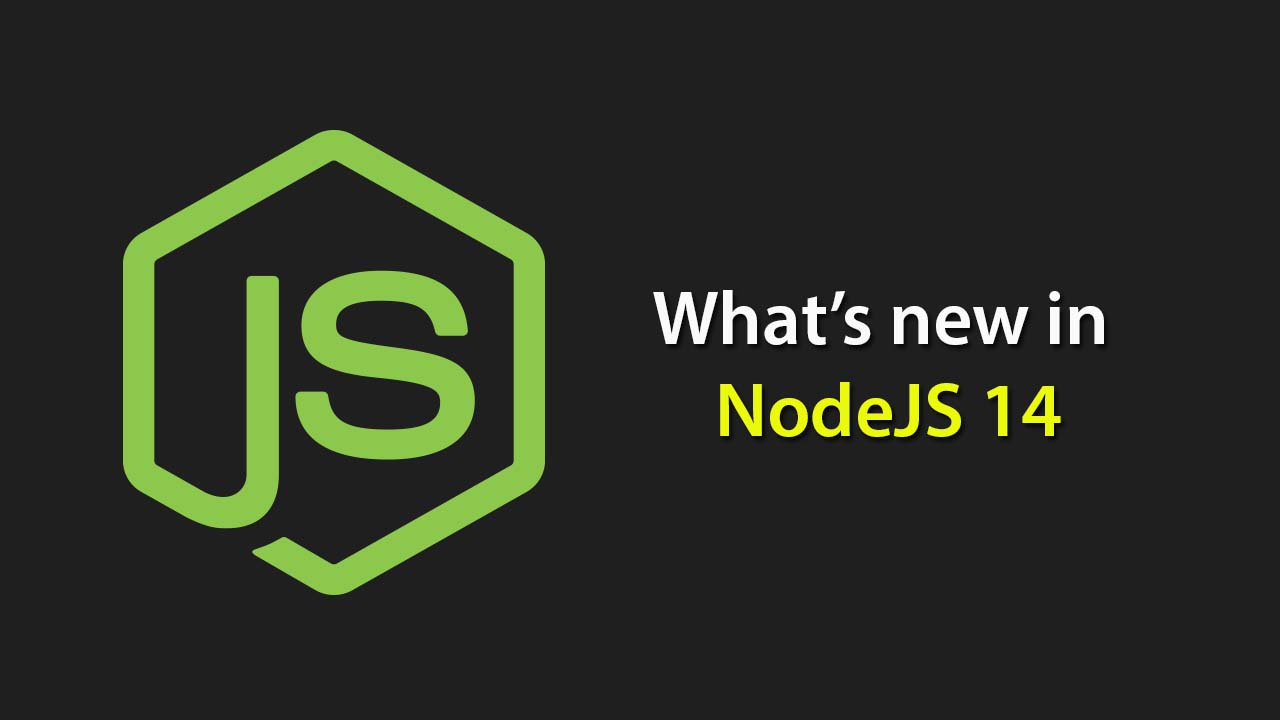 We’re excited to announce that Node.js 14 was released today! The highlights in this release include improved diagnostics, an upgrade of V8, an experimental Async Local Storage API, hardening of the streams APIs, removal of the Experimental Modules warning, and the removal of some long deprecated APIs.

We’re excited to announce that Node.js 14 was released today! The highlights in this release include improved diagnostics, an upgrade of V8, an experimental Async Local Storage API, hardening of the streams APIs, removal of the Experimental Modules warning, and the removal of some long deprecated APIs.

Node.js 14 replaces Node.js 13 as our current release line. As per the release schedule (https://github.com/nodejs/Release#release-schedule), Node.js 14 will be the Current release for the next 6 months, and then promoted to Long-term Support (LTS) in October 2020. As always, corporate users should wait to upgrade their production deployments until October when Node.js is promoted to LTS. However, now is the best time to start testing applications with Node.js 14, and try out new features.

As a reminder — both Node.js 12 and Node.js 10 will remain in long-term support until April 2022 and April 2021 respectively (more details on the LTS strategy here).

Get started now! Learn how to download the latest version here: https://nodejs.org/en/download/current/

Before we dive into the features highlighted for this release, it’s important to note that new features added to the master flow quickly into the current release. This means that significant features become available in minor releases without too much fanfare. We’d like to take this opportunity to highlight some of those in the Node.js 14 release even though they may already have been backported to earlier releases.

The diagnostic report will be released as a stable feature in Node.js 14 (it was added as an experimental feature in Node.js 12). This is an important step in the ongoing work within the project to improve and build up the diagnostics available when using Node.js and the ease with which they can be used, with much of this work is pushed forward by the Node.js Diagnostics Working Group.

The diagnostic report feature allows you to generate a report on demand or when certain events occur. This report contains information that can be useful to help diagnose problems in production including crashes, slow performance, memory leaks, high CPU usage, unexpected errors and more. For more information about the diagnostic report feature, see https://medium.com/the-node-js-collection/easily-identify-problems-in-node-js-applications-with-diagnostic-report-dc82370d8029. As a stable feature there will be one less command-line option needed to enable Diagnostic reports and it should be easier for users to enable it in production environments.

As always a new version of the V8 JavaScript engine brings performance tweaks and improvements as well as keeping Node.js up with the ongoing improvements in the language and runtime. This time we also have some naming fun with it being version 8 of V8 (“V8 of V8”).

Highlights of the new JavaScript features include:

For more information about the new features in V8 checkout the Node.js V8 blog: https://v8.dev/blog.

The project has been working on APIs to help manage context across Asynchronous Calls over a number of releases. The experimental Async Hooks API was introduced in earlier versions as part of this work. One of the key use cases for Async Hooks was Async Local Storage (also referred to as Continuation Local Storage). There have been a number of npm modules that have provided APIs to address this need, however, over the years these have been tricky to maintain outside of Node.js core and the project reached a consensus that exploring having Node.js provide an API would make sense. The 14.x release brings an experimental Async Local storage API (which was also backported into 13.10) https://nodejs.org/api/async_hooks.html#async_hooks_class_asynclocalstorage. We are looking for the community to try out this API and give us feedback on abstraction model, API interface, use case coverage, functional stability, naming, documentation etc. so that we can work on getting it out of experimental in later releases. The best way to provide feedback is to open an issue in the diagnostics repository here (https://github.com/nodejs/diagnostics/issues) with a title along the lines of “Experience report with AsyncLocalStorage API”.

This release includes a number of changes marked as SemVer major in the Node.js Streams implementation. These changes are intended to improve consistency across the Streams APIs to remove ambiguity and streamline behaviors across the various parts of Node.js core. As an example, http.OutgoingMessage is similar to stream.Writable and net.Socket behaves exactly like stream.Duplex. A notable change is that the autoDestroy option is now defaulted to true, making the stream always call _destroy after ending. While we don’t believe these SemVer major changes will affect most applications, as they only change edge cases, if you rely heavily on Streams it would be good to test while Node.js 14 is the current release so that it is ready for when Node.js 14 becomes LTS in October 2020.

Packages written in Web Assembly for Node.js bring the opportunity for better performance and cross-platform support for certain use cases. The 14.x release includes an experimental implementation of the Web Assembly System Interface (WASI) in order to help support these use cases. While not new to Node.js v 14, this is noteworthy as WASI has the potential to significantly simplify the native modules experience. You can read more about it in the API docs: https://nodejs.org/api/wasi.html.

In Node.js 13 we removed the need to include the — experimental-modules flag, but when running EcmaScript Modules in Node.js, this would still result in a warning ExperimentalWarning: The ESM module loader is experimental.

As of Node.js 14 there is no longer this warning when using ESM in Node.js. However, the ESM implementation in Node.js remains experimental. As per our stability index: “The feature is not subject to Semantic Versioning rules. Non-backward compatible changes or removal may occur in any future release.” Users should be cautious when using the feature in production environments.

Please keep in mind that the implementation of ESM in Node.js differs from the developer experience you might be familiar with. Most transpilation workflows support features such as optional file extensions or JSON modules that the Node.js ESM implementation does not support. It is highly likely that modules from transpiled environments will require a certain degree of refactoring to work in Node.js. It is worth mentioning that many of our design decisions were made with two primary goals. Spec compliance and Web Compatibility. It is our belief that the current implementation offers a future proof model to authoring ESM modules that paves the path to Universal JavaScript. Please read more in our documentation.

The ESM implementation in Node.js is still experimental but we do believe that we are getting very close to being able to call ESM in Node.js “stable”. Removing the warning is a huge step in that direction.

Node.js provides pre-built binaries for a number of different platforms. For each major release, the minimum toolchains are assessed and raised where appropriate.

This release coincides with us moving all of our macOS binaries to be compiled on macOS 10.15 (Catalina) with Xcode 11 to support package notarization. As binaries are still being compiled to support the respective compile targets for the release lines, we do not anticipate this having a negative impact on Node.js users on older versions of macOS. For Node.js 14, we’ve bumped the minimum macOS target version to macOS 10.13 (High Sierra).

On our Linux based platforms, for Node.js 14 the minimum GCC level remains at GCC 6, however, we plan to build/release the binaries for some of the platforms with GCC 8.

Node.js 14 will also not run on End-of-Life Windows distributions.

Further details are available in the Node.js BUILDING.md.

For the 6 months, while it is in the ‘current’ phase, Node.js 14 will receive the most new features that are contributed to Node.js. For the next 6 months, this release line is perfect for trying out the latest features, testing the compatibility of your project with the latest Node.js updates and giving us feedback so that the release is ready to transition to LTS in October.

We’d like to use this opportunity to say a big thank you to all the contributors and Node.js collaborators that made this release come together. We’d also like to thank the Node.js Build Working Group for ensuring we have the infrastructure to create and test releases and making the necessary upgrades to our toolchains for Node.js 14.