VueJs: Server Side Render with Vue-router 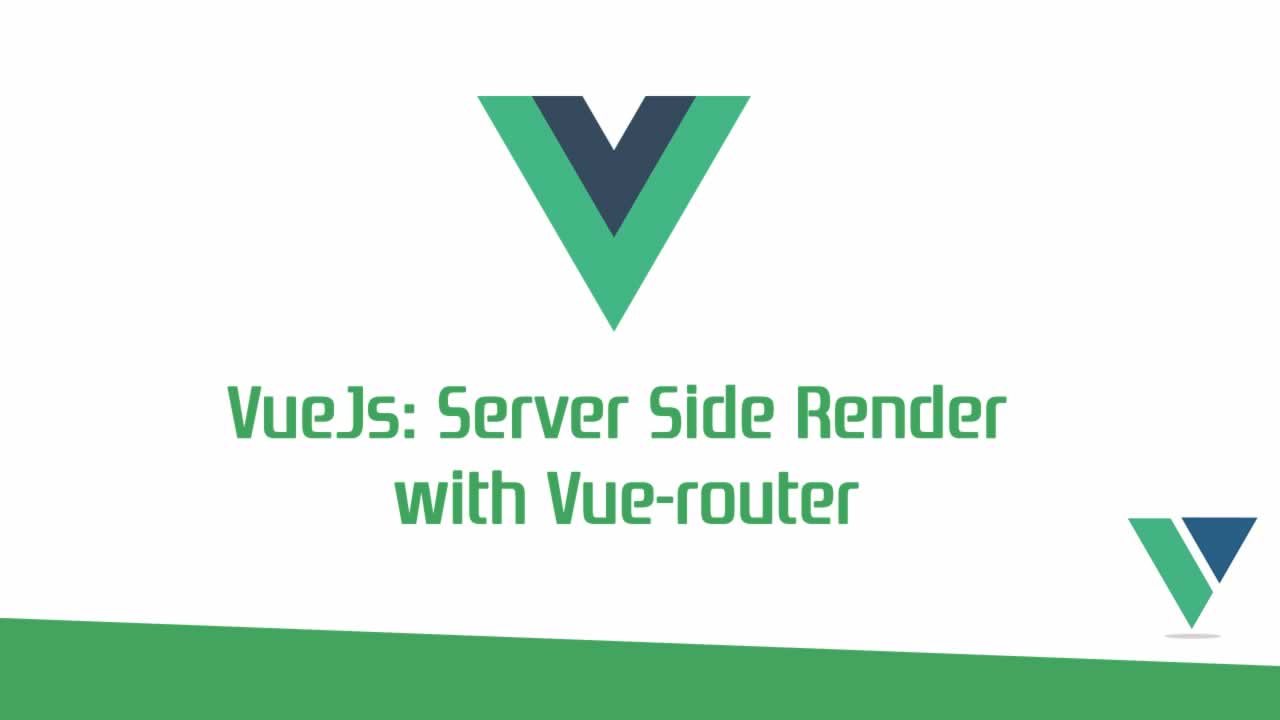 The objective of this article is to provide all the information you may need to figure out if server-side render (SSR now on) is an approach that you should consider or not.

We are also going to go through a basic (but not necessarily simple) example of how to configure and use SSR with vue-router.

I have written a shorter , implementation focused, version of this article in Anthony Gore blog (without any extra information about server side render). Just in case you are interested only in the implementation I leave you the link:

When should I consider using SSR?

There are two main reasons for using SSR.

1. Better SEO. Search engine crawlers are going to see a fully rendered page when the application loads since the server is the one building that first loaded page.
2. Faster time-to-content. Since the first render is entirely built by the server you are going to get, from the client side, a fully-rendered page sooner. This provides a better user experience and is really important for apps where time-to-content plays a critical role.

So if SEO or time-to-content are critical for your app you should probably use SSR no matter the trade-offs but in any other scenario… think it twice and be certain you are going to win more than you are going to lose because the trade-off is not cheap. If your only concern is improving SEO there are other technics to consider like prerendering.

There are at least three major things you need to consider before choosing to use SSR.

1. Some three party libraries may need some manipulation to be able to run in an SSR app.
2. SSR requires an environment where Node.js server can run.
3. Since this is going to be more expensive for a server than just serving static files if your application has or expects high traffic you have to be prepared to deal with high server load.

Before jumping into the actual implementation there are some main concepts that you need to understand… so let’s go through them:

The configuration is not simple and the information on the web about SSR using vue-router is, at this day, kind of poor.

1. We are going to use a template to start that has already configured a basic webpack build for a vueJs app. We are also going to need to install vue-cli:

Now we need to install all the dependencies of webpack-simple template. Until this point nothing related to SSR we are just setting a general vueJs environment.

2. So now we have a vueJs project ready to start adding SSR configuration, but before that, we need to add three dependencies all related to SSR.

For our base webpack configuration we are just going to use the one that comes with the template we installed, except that we are changing the entry to entry-client.js.

There is nothing strange here except two things, the entry is entry-server.js and for the output, we are using commonjs as a library target.

So that’s the webpack configuration, let’s see the scripts for building the app in packages.json.

You can change this to your needs but there are three steps you need to perform to start your application.

In the configuration, we are using the start script that is going to run the three steps that we mention before. But we have set scripts to run them separately if needed.

This is our main HTML file. There are a couple of things to discuss:

This component is the root component of our app and it has a couple of responsibilities.

1. configuration for menu using vue-router links.
2. set the container for the routes components to render.
3. set the element with the id app that is going to be used for mounting the client side part of the application.

Since our application is going to start on the server we need to provide a new instance of the router for each server request. Inside the router folder, we are going to have a file with our router config. This code is quite straight-forward. This is the entry file for the webpack client build configuration.

This file is the entry point for webpack server build. The result of that build is what we are going to target later when we configure the server.

Configuring and starting the server

We have almost everything ready, the only thing missing is the configuration and start-up of the express server.

Wow!!!… and you thought it was too much before… haha don’t worry let’s dig into the code and see what’s going on, is the last thing to configure.

The success callback does a bunch of stuff so let’s go through that:

Finally, we start listening to the port 8080.

Now if you run the script start and open the localhost:8080 in the browser you are going to see things working SSR and vue-router.

And this is it ladies and gentlemen!!

I don’t think I need to say that is a lot of configuration to make things work, but once is done you are not going to touch it a lot, just be sure SSR is what you need.

I leave you the github project working with all these things we just went through: